You are here: Home / Archives for toys 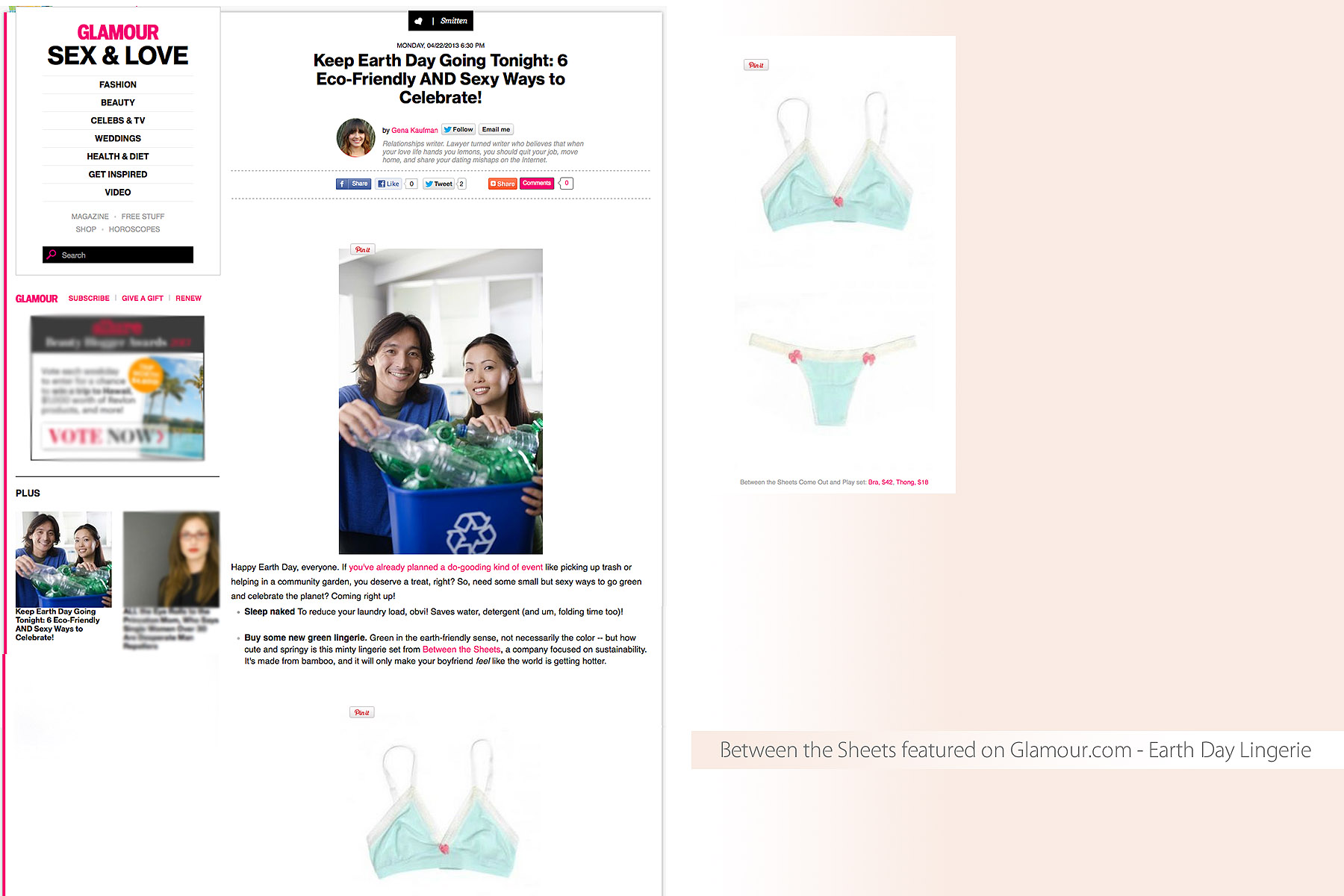 This Earth Day lingerie guide from Glamour.com features our Come Out and Play bralette and thong. We’re tickled Green to be featured by Glamour Mag talking about sexy and sustainable products to celebrate Mother Earth! 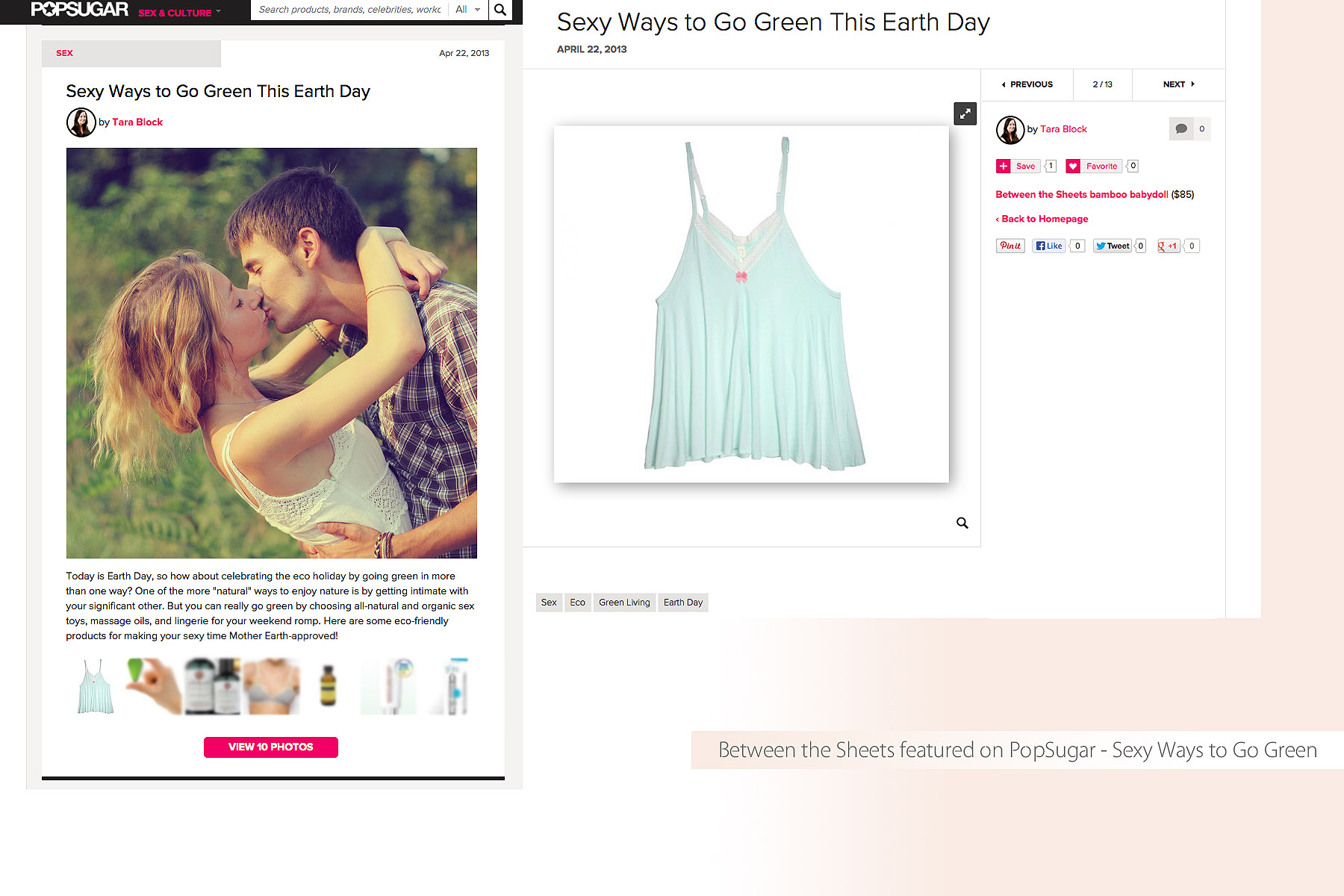 Popsugar gets green in this sexy Earth Day gift guide featuring our new Come Out and Play babydoll, made of sustainable micro-modal with Made in USA lace trim and manufactured right here in NYC it’ll cut your top drawer’s ecological footprint down to “earth hugger”. 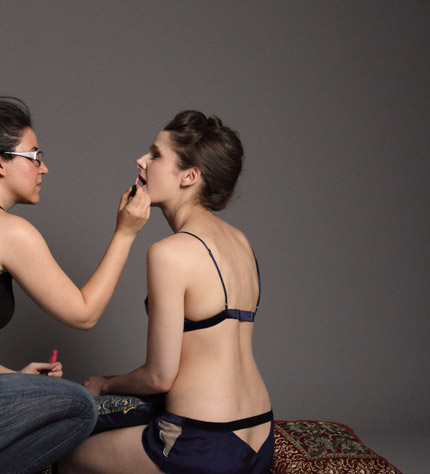 In a city like New York you can expect to meet a lot of interesting people with a wide range of careers and life stories, but I can honestly say that I have never met anyone like Arden.

With a background in neurolinguistic programming  and a fascination and hunger for what makes the opposite sex tick she’s honed her seductive personality in a way that few women do. Seduction make no mistake is not just about sex, and no stranger to a dungeon Arden’s been there and done that, and lets be clear we’re not talking Shades of Grey. All those experiences paired with an innate insight into the female psyche have lent her a unique perspective on the subject of dating, and so its no surprise that her first foray into the world of publishing manifested itself in a book titled “The New Rules of Attraction”. Anyone who’s dated in NYC or watched Sex and the City won’t be surprised that a book like this is born from an author who’s experienced it up close, because truly dating in New York is like no other city (and clearly we wear that as a badge of honor).

It’s like a jungle out there, literally with no better way to put it but “fresh meat” arriving daily. There is an imbalance of power in New York dating, and although Arden never says this explicitly, I strongly suspect this played no small part in the genesis of her book.

So when it came time for us to shoot our new Arabesque range Arden’s powerful seductive persona came to mind, and I am truly honored to have worked with her. We’ll do another post sharing the images from this Spring Summer from the Arabesque luxe range, as well as what’s to come for Autumn Winter 2012. So without further ado, our interview with Arden Leigh author, seductress of the modern age 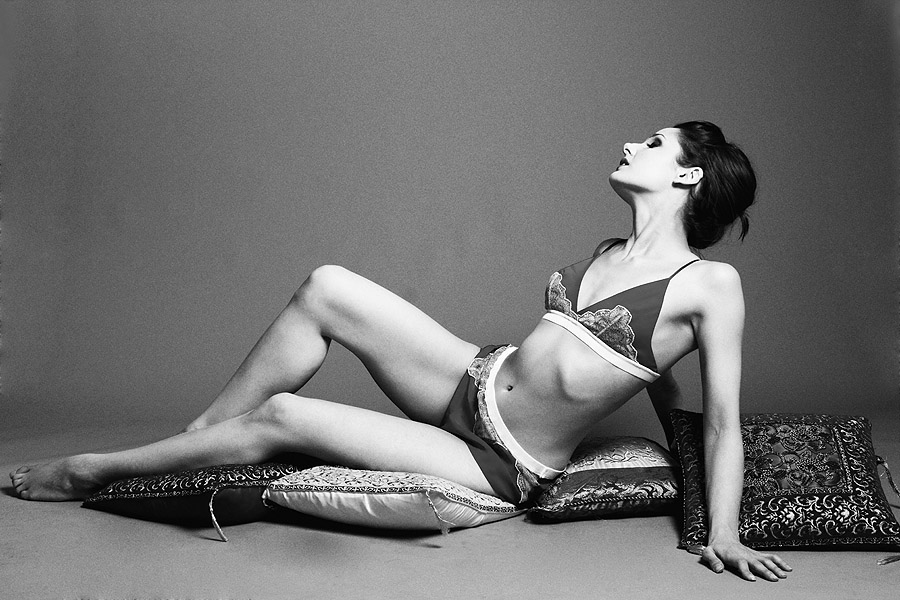 Layla: Tell us a little bit about yourself, how does one become a seduction coach? Like lingerie design it is not a field that career counselors have on their radar, so how did you come to be the master of seduction you are today?

Arden: The inspiration for me to become a seduction coach for women originally came from the men’s pickup artist community (you might remember the VH1 show The Pick-Up Artist, or Neil Strauss’s book The Game). I started following that community closely because I found their methods so much more practical and broken-down into actionable steps than the advice given to women. And I noticed handfuls of women trailing them at their events and book signings, asking what the girl equivalent of “game” would be, and despite their remarkable innovations for men, I never felt the pickup artists answered women in a satsifying manner. So I set out to study everything that they studied — evolutionary psychology, social dynamics, neuro-linguistic programming, conversational hypnosis, brand marketing, you name it — but I studied them with women’s goals in mind. And obviously I put everything I was learning to use in my own life to learn what worked and what didn’t. Then when I set out to write my book “The New Rules Of Attraction,” I was surprised at how easily it came together, and at how firmly I believed in everything I was writing. By the end of the book, it had almost become a manifesto.

Layla: Does a lot of pressure come with the title of seduction coach?

Arden: It did, at the beginning. When I got my book deal for The New Rules, I had just come out of a comfortable four-year relationship, and getting back into the dating pool made me worried about how closely I’d be scrutinized (i.e., if I got rejected by someone I wanted, would it make me look like a fraud). But I found my sea legs again pretty easily, and nowadays, whether single or partnered, I’m proud to live the lifestyle that I’ve created for myself. And I can attest that I practice everything I preach on a daily basis. I’ve also gotten really comfortable with crashing and burning, and so I’ll push things sometimes just to see what I can learn from them. Sometimes they actually work (like, for example, asking a guy out on Twitter whom you’ve never met in real life. Who would’ve guessed? We dated for two months). Or even when they don’t, the results are always interesting. Regardless, I’m way past the point of judging the value of my work by who’s into me and who’s not. 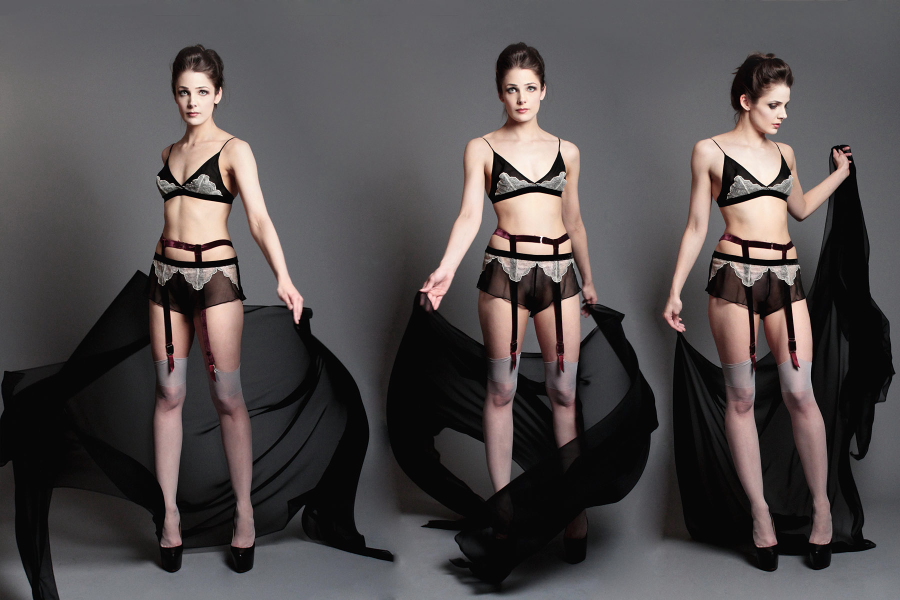 Layla: In your eyes what role does lingerie play in seduction?

Arden: Lingerie is a bit like creating suspense. You want your partner to wonder what he’s going to find when he undresses you. And it’s fun to hint at what might be there by showing off a bit of bra strap or decolletage, or letting a garter strap show when you cross your legs. I’ve also taken to wearing lingerie by itself out in the nightlife scene. It’s become a pretty normal thing for me to do. Some accuse me of seeking attention, but what I love about wearing lingerie by itself is that it is both glamorous and vulnerable at the same time. You’re dressed up in these beautiful garments, but you’re also still just in your underwear. And I think there’s always something sexy about a hint of vulnerability. 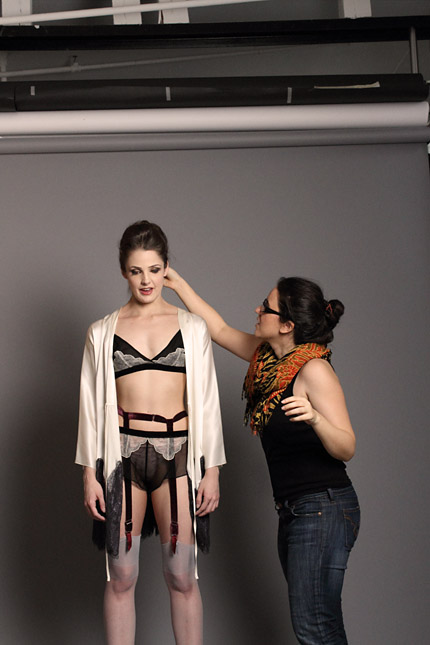 Layla: You mention in many interviews and in your book that dating has changed, what does that mean for today’s woman looking for love?

Arden: Dating has changed because our means of communication have changed. No one out there is really teaching us how to use things like social media and text messaging, and as I think we’ve all seen, both things can be very dangerous in the dating world when used improperly! If you remember that book The Rules that was published in the early nineties, they used to have rules in there like “He has to call you by Wednesday for a Saturday night date” or “Don’t call him just to hear his voice, call his answering machine while he’s at work and then hang up!” Obviously things like that don’t apply to our world anymore, since many of us work jobs outside the Monday through Friday 9-5 schedule, and since nobody has landlines, everybody has caller id, and most people don’t even listen to voicemail anymore. And the crazy thing is that this book is still on the shelves! I can’t tell you what dating was like in the early nineties because I was just out of kindergarten, so maybe it did work back then, but it certainly doesn’t apply to today. Moreover, guys of our generation act a lot different from guys of our parents’ generation. Most aren’t nearly the womanizers that men 20 years ago were, so that whole tactic of playing “hard to get” is pretty much obsolete, because most of the time you’ll just sit there and not get gotten. At the same time, however, acting clingy and desperate is still as ineffective as ever. So what women really need, and what I provide in The New Rules Of Attraction, is a proactive strategy to navigate the changing landscape of communication and to attract, compel, and hang onto the kind of guy they want.

Layla: Women today are more empowered than ever to make the initial approach, what do you think should a girl even plan the first date too?

Arden: Sure! I just wouldn’t call it a “date.” I like to encourage something that the men’s seduction community refers to as “plausible deniability,” which means that you haven’t really committed to whether your spending time together is romantic or just friendly in nature. There should be a little bit of mystery the first time you hang out, so that if a kiss happens, it’s charged with a certain exciting tension and not simply an awkward expectation. As far as planning the evening goes, I like to bring up in conversation something that I have an interest in doing (“Hey did you hear about this movie, etc etc?”) and then later ask them if they’d like to go with me (“It was great meeting you! Hey we should go see that movie sometime this week.”). That makes for a really smooth transition, and then you can escalate from there.

Layla: Give us our single or aspiring to seduce fans a reason they must buy your book?

Arden: Because life is way too short not to go after what (or who) you want.

Layla: let’s play a game of word association, what is the first word that comes to mind in response to the following:

L: outdoors – A: Game of Thrones (sorry, was just watching the first episode, and it had more outdoors than I’ve seen in years!)

L: fave beauty products – A: I wear Bare Minerals foundation and blush, use MAC for eyeshadows and lipstick, Fresh for eye creams/moisturizers and lip balm, Jonathan Product for all things hair, and Lush for bath bombs.

L: last book you read – A: The Last Living Slut by Roxana Shirazi, now reading Guts by Kristen Johnston and La Seduction: How the French Play the Game of Life by Elaine Sciolino

L: last movie you saw – A: The Hunger Games

Tempted for more? You can read Arden’s monthly column in Auxiliary Magazine and posts on her blog, follow her on twitter @ArdenSirens, and buy her book The New Rules of Attraction 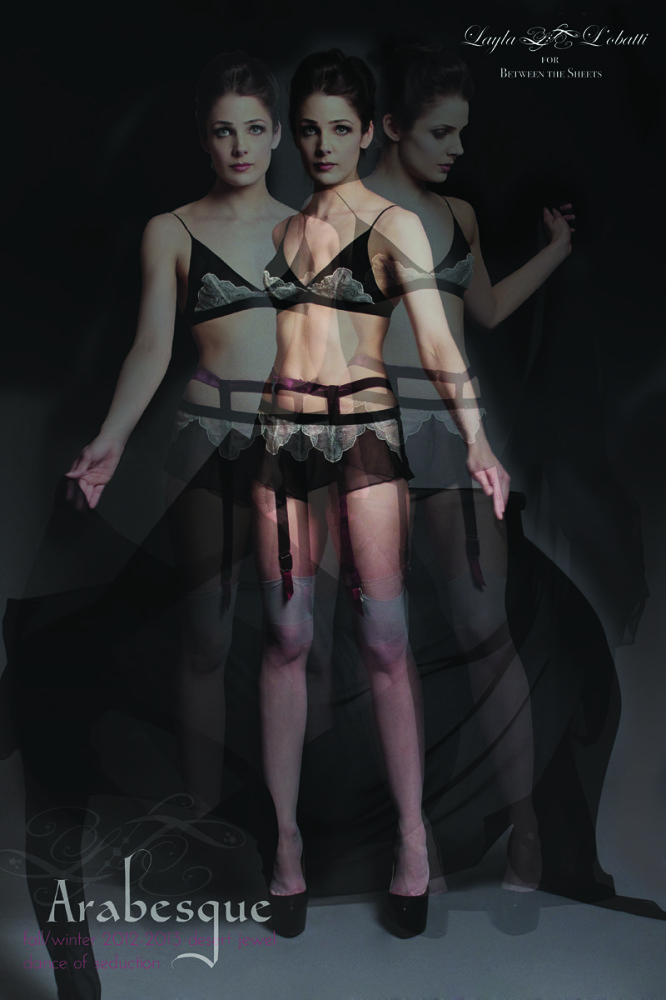 …and of course stay tuned for more images and video from our shoot!

Between the Sheets Inc - purveyors of luxury lingerie, designer loungewear, and luxurious lifestyle products brings you a blog about our brands, collections, and life's simple luxuries.